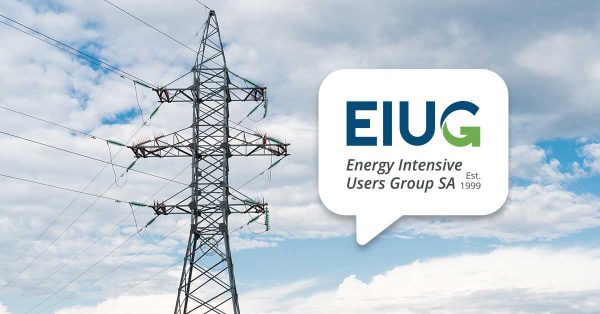 Energy is the engine for economic growth and development in our country. The EIUG advocates for reliable electricity supply at acceptable quality and competitive prices, and for a transformative energy supply industry. In this regard, the EIUG has noted the statements made by the Eskom CEO in the recent ENSAfrica webinar on 2 February 2021.

Some of the statements touch on several issues the EIUG has been advocating for regarding reliability of electricity supply and competitive pricing.

The EIUG does not support the proposed electricity tariff double digit increases requested by Eskom. The proposed 3 times inflation increase for FY22 will be an unaffordable price shock to the South African economy.

The removal of all subsidies in the current tariff for large power users is required to establish a cost-reflective tariff. It will assist with retaining large power users; allow the restarting of operations that have stopped due to unaffordable electricity cost; and encouraging further investment in the economy. This will be a positive step towards addressing the utility death spiral Eskom finds itself in.

The role of self-generation in augmenting the constrained electricity supply and the increasing of the 1MW limit on licence exemption to 50MW will go a long way in expediting investments in self generation, especially when wheeling mechanisms can also be put in place. Government must act immediately and amend the Electricity Regulation Act’s Schedule 2 to effect this proposed change, as well as incorporate the proposed amendments from industry (from BUSA, the EIUG and the Mineral Council) to create regulatory certainty for self-generation. Coupled to this exemption there is a need to update the wheeling framework so that there is easier and faster access to the network to connect generating sites to customers. The EIUG is encouraged that Eskom is also supporting these statements and offering to assist customers with self-generation applications.

The capacity constraint experienced by Eskom has significant negative impacts on EIUG members and we are seriously concerned about the growing capacity gap. More capacity is urgently required to improve the system reliability. On the fixed network cost as argued by Eskom in the recent NERSA public hearings on Retail Tariff, though we understand the principle behind the proposal, we however caution Eskom not to implement that proposal in a manner that will be a new barrier for self-generation.

We will continue to engage Eskom, government departments and other stakeholders in a constructive manner to raise our concerns and work with them in finding solutions. As a collective, we need to create an enabling electricity supply industry to not only prosper as energy intensive users but to empower the country through the deployment of self-generation, closing of the national supply deficit, stabilising our escalating electricity costs and the decarbonisation of our economy. The success of our economy is heavily dependent on a reliable and affordable electricity supply industry.

Notes to the editors:

The EIUG was established in 1999, and is a voluntary, non-profit association of energy intensive consumers whose members currently account for over 40% of the electrical energy consumed in South Africa. As electricity is a key input to the processes of these organisations, it is the ‘life blood’ of our businesses. Our members collectively contribute over 20% to the GDP of South Africa and employ over 650 000 people across multiple sectors, including mining, quarrying, manufacturing, electricity, transportation, and water. The EIUG is dedicated to the promotion of the interests of energy users in South African Industry.

The EIUG is a consumer-led organisation working for the good of the country. The group strongly believes that energy is the engine for economic growth and development in South Africa. We are therefore committed to working with government, power utilities and other stakeholders to ensure South Africa has energy industries which provide reliable supply at acceptable quality and competitive prices.