The EIUG and the Industry Task Team on Climate Change (“ITTCC”) collectively view climate change as one of the greatest threats humanity has ever faced. The impacts of climate change on people’s livelihoods, the environment and future generations is seen daily worldwide and cannot be understated.

…[CLICK ON THE DOCUMENT IMAGE BELOW TO READ FULL TEXT] 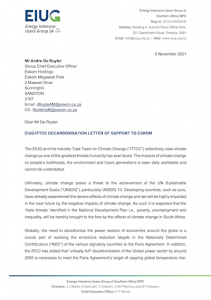